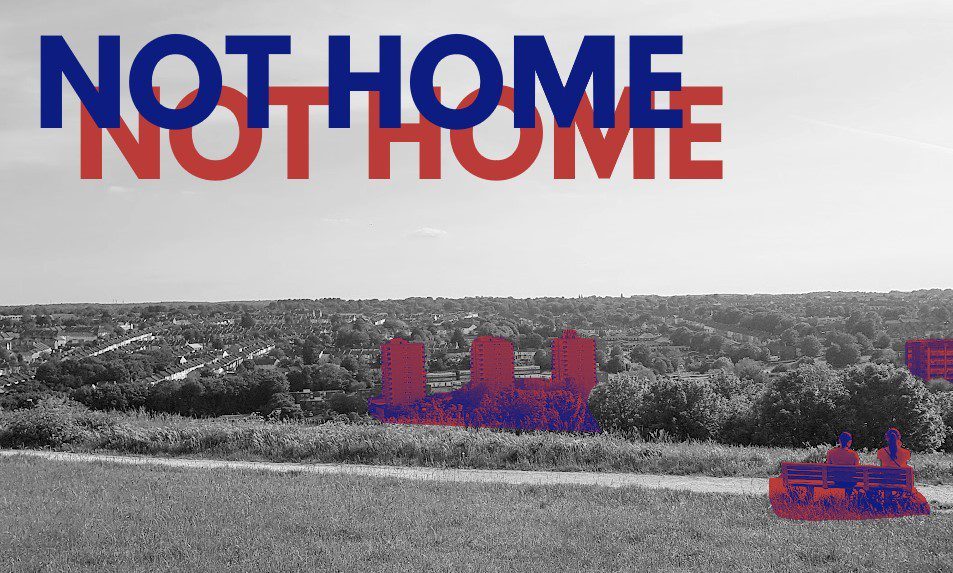 “Co-creation” is a term with a nebulous–maybe ignominious–history. Its earliest and perhaps still most prominent use comes from that ever-unwelcome world of Business where it lives among a cluster of corporate jargon: coproduction, crowdsourcing, open innovation.

It most likely then fell into the world of Arts through the portal of Community Involvement–whether that is curating galleries, building community projects or encouraging participation in the arts—and it is unsurprising that its main use has been in Theatre practice. Theatre (here also encompassing dance, opera and other performance art) always has some kind of collaboration, from director to performer, set building to lighting, stage to audience. But at what point does collaboration become co-creation? 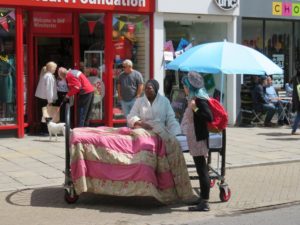 Bed, a participatory arts piece developed out of workshops hosted by Entelechy Arts, works on several layers as co-creative theatre. The “stage” (a bed) is in a public space. The “actor”, who was also involved in the development of the piece, reacts to members of the public confused or concerned to why an elderly person in a bed is laying in the middle of the street. The theatre comes from the genuine questions and conversation created by the non-artist; and the artist is drawing on their real life experiences and can only say or create based on what is given to them from the non-artist.

Because of the pertinent issues of elderly vulnerability and the idea of being “invisible” there is a genuine relationship formed, if only for the length of a conversation: there is no ownership of this fleeting theatre, nor consumption of the participants.

Moreover, the piece itself developed from Entelechy Arts’ workshops in Deptford, from non-professional actors working out how to express their feelings over an issue in their life and how to share their expression. There is no hierarchy in the piece. 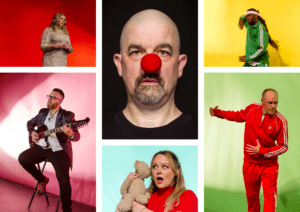 My first real experience with co-creation was assisting with Darren Pritchard’s Medway production of Rent Party. Rent Party is an evolving, touring production whose exact show depends upon its cast members—again largely non or semi-professionals. It takes its cues from themes of community, hardships and expression, inspired by 1920s Harlem Rent Parties. In the Rent Party rehearsals, Darren acted as a facilitator and assistant: creating, where needed, elements such as a monologue to back a dance performance or helping to find a music soundtrack but otherwise acting as a sounding board for the cast members.

In this way, although perhaps more hierarchical than Bed, Rent Party works as co-creation theatre because it ultimately is the product of all it’s creative players: this is not the case of an actor giving a spin to a line or a director framing a scriptwriter’s words but a piece from conception to completion made through participation. It is also something beyond collaboration: co-creation is as much about the relationships between participants as it is the final product. Collaboration is two or multiple authors where co-creation works to blur the definition of author altogether. 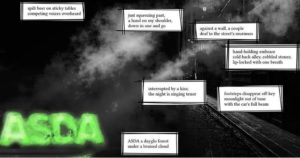 It’s this idea of author that comes back to me when thinking about co-creation. Poets, or at least writers, may be the most egotistical of artists. A painter or sculptor reflects, a writer or director shows, a dancer or musician expresses, but a writer imposes his idea and philosophy on the reader. It is only a short step from author to authority.

When a writer then wants to tackle a Big Idea, to rely on that one voice feels reckless, almost delinquent. I had been ruminating over “horizontal poetry” ever since reading On the Road to Basra, a freewheeling and half-surreal poem written in the run up to the Iraq War, a text of half-thoughts as writers tried to coalesce their emotions about the invasion. It stands in the long tradition of renga where each verse is linked to the ones around it by direct or emotional means. Nothing in the poem would stand by itself: each poet then has an equal hand in the creation.

During lockdown I found myself investigating more about renga, hosting through various means online renga sessions. Without a “Master” these became something between workshops and writing sessions, the participants discussing each verse and how the poem would follow. It was also at this time I was reading more renshi—free verse renga—particularly the collection Trilingual Renshi, a poem written across three poets and languages.

Is this collaboration or co-creation? Is a poetry of co-creation possible? I’m not sure but I want to find out. It feels like when writing a poem I can be an architect, creating a structure even if elements are made from other long-standing ideas. Now what if we try to make construction worker poetry: finding the wiring, the brickwork, the scaffolding from our work and building it up as we go. It might be unwieldy and unsteady but the creation would be as much the point as the final piece.

Not Home is a first real attempt at this. It is participation, collaboration and outright theft. The ideas about home can only be fully formed through the conversation of our writing and whatever is created cannot belong to any one person because it could not have been created without everyone’s participation. It does not try to answer questions because it is still formulating the words to ask. Above all, it is about being an audience to your own art, and writing towards shared divisions.

Inspired by Rent Party’s focus on both community and co-creation, “NOT HOME” is a poetic legacy project by David Dykes, looking to explore our emotions and concerns around the UK’s housing crisis. 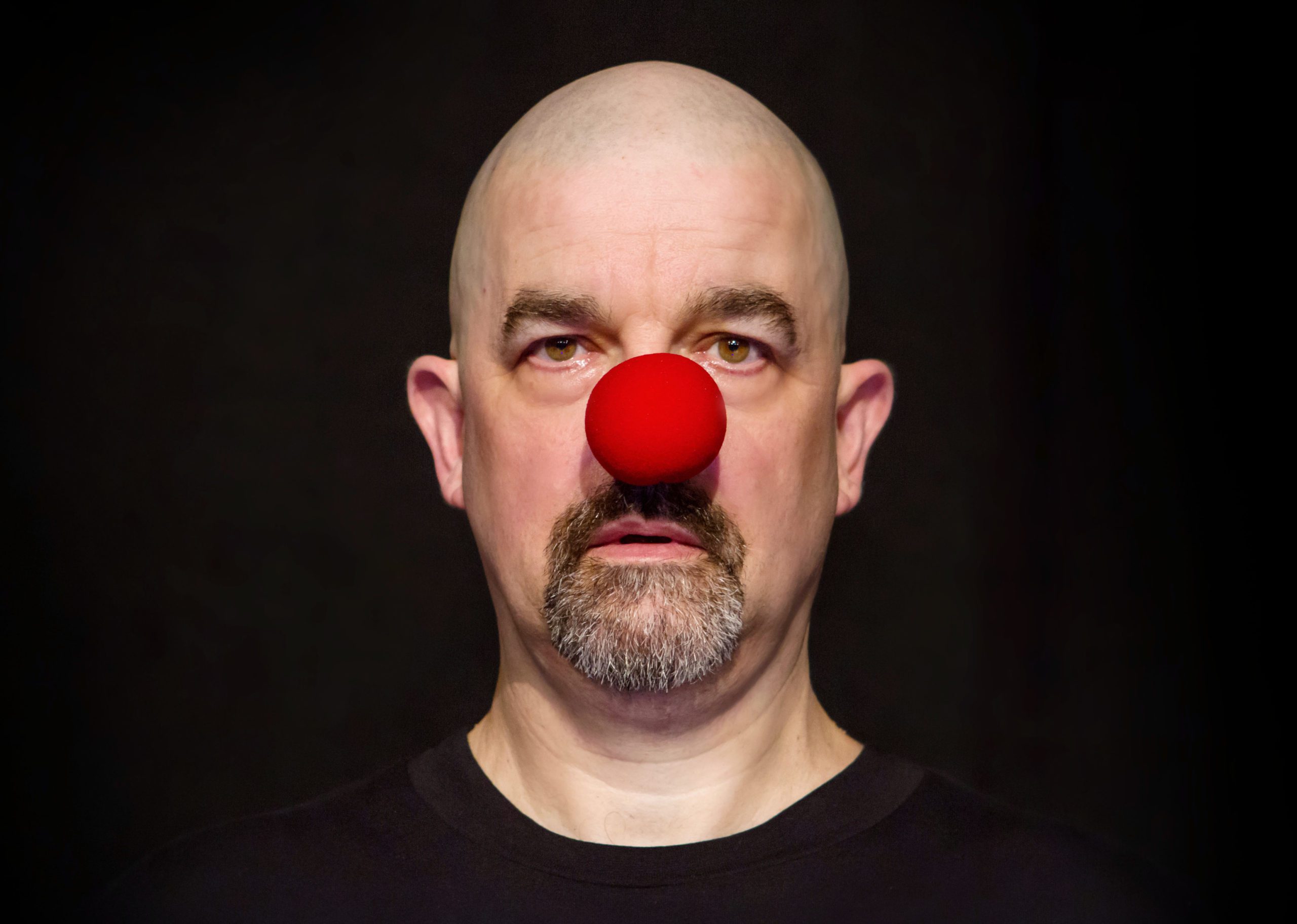 A second opportunity to watch Rent Party on demand this Autumn.