What were the Harlem Renaissance Rent Parties?

In racially strife 1920s America the Harlem Renaissance was an explosion of creativity in literature, music, theatre and the arts in general centred around the African-American community and the New York neighbourhood of Harlem in particular. 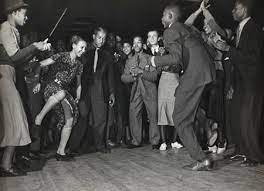 As part of the “Great Migration” from the Southern states, thousands of African-Americans sought a better life as a mixture of new economic and educational opportunities deprived of them in the heavily segregated South were opening up in the Northern states.

This was by no means the start of Black artistic creation in America—where artists, writers and musicians had been working since the mid-19th Century—but with Black soldiers newly returning from the first World War and influential Black socialists such as Claude McKay flourishing in the arts, there was a new political consciousness rising among Black artists.

With writers such as Zora Neale Hurston and Langston Hughes, artists such as Richmond Barthe and Aaron Douglas, actors such as Paul Roberson and Josephine Baker and musicians such as Louis Armstrong, Cab Calloway, Duke Ellington and Billie Holliday, the creativity in Harlem and the wider United States was bright, dynamic and electric.

However often the artists and the audience had to be disconnected. Musicians like “Fats” Waller may have been able to play in white-owned club but Black audiences were still barred from entry. Then, with the advent of the Great Depression, many doors closed on all but the most successful artists: and even fewer audiences could afford to pay for entry to theatres, nightclubs and journals.

“House rent parties were a facet of Harlem life even before the Depression,” Duke Ellington recalled, “An outgrowth of parlor socials and church suppers held to raise funds for church needs, house rent parties aimed at helping dwellers of Harlem’s railroad flats meet rents that skyrocketed monthly. Neighbors brought all kinds of food—fried chicken, baked ham, pig’s feet, pork chops, gumbo, potato salad, and more—to which a supply of bootleg liquor was added. An admission was charged, and the piano players supplied the entertainment.”

These parties were more than casually-thrown get-togethers: there was a complex set of home-grown industries built up around rent parties. Hosts would advertise the parties with rent party tickets printed from portable presses with snippets of poetry and bustling slogans—one read “”You Don’t Get Nothing for Being an Angel Child, So You Might As Well Get Real Busy and Real Wild.”

The houses would be cleared of furniture; rugs pulled up, coloured bulbs fitted and pianos moved into the front rooms. “Cutting contests” of competing musicians fighting it out to prove who was the most talented kept the heat swelling in the Harlem streets.

The cultural importance of the rent parties cannot be understated: it equalised and unified the burgeoning pan-African arts movement of the United States and in turn greatly influenced the development of those art, especially dance and jazz. It was also an arena where the LGBT community had rare freedoms and artists albeit with some subtlety able to explore queer themes in their art, including Countee Cullen, Ethel Waters, Richard Bruce Nugent and Gwendolyn Bennett.

Arts, performance, exploration and festivity were all uniquely converged in the Rent Party tradition—something we hope we can continue to celebrate